Notice: Function amp_is_available was called incorrectly. `amp_is_available()` (or `amp_is_request()`, formerly `is_amp_endpoint()`) was called too early and so it will not work properly. WordPress is currently doing the `init` hook. Calling this function before the `wp` action means it will not have access to `WP_Query` and the queried object to determine if it is an AMP response, thus neither the `amp_skip_post()` filter nor the AMP enabled toggle will be considered. It appears the plugin with slug `jetpack` is responsible; please contact the author. Please see Debugging in WordPress for more information. (This message was added in version 2.0.0.) in /var/www/wp-includes/functions.php on line 5835
 Here’s Something YOU Have Never Thought of About April Fool’s Day – The Original Bo Jackson | Christian Daily Devotionals
Skip to content 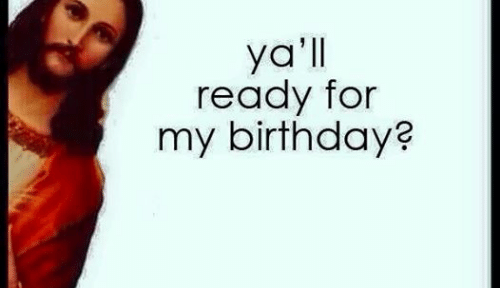 Since it’s April Fool’s Day, I wanted to chase a theological rabbit for a minute. This is NOT an April Fool’s joke, but it has to do with my take (purely conjecture) on a possibility about WHY we call April first a fool’s day. In so doing, I’ll share some quick opinions about Jesus’ birthday and the Real April Fool: and offer the perspective that perhaps there is a reason we can’t nail down the exact date of Jesus’ birthday…The Scripture says it like this:

“After Jesus was born in Bethlehem in Judea, during the time of King Herod, Magi from the east came to Jerusalem and asked, “Where is the one who has been born king of the Jews? We saw his star when it rose and have come to worship him.” (Matthew 2:1-2, NIV)

The historical birthday of Jesus has been debated and even disputed in modern times. Because of a lack of clarity over the timing of Herod’s reign and Quirinius’ term as governor of Syria, several theories have arisen around the exact day Jesus was born. Most scholars agree that Jesus was born in 3-4 BC, and was probably not born on Christmas day itself.

Our modern date for Christmas probably started around 400 AD, when the Church moved Christmas there from January 6 to compete with (and perhaps redirect) the pagan celebration of the birth of the sun. At any rate, there is no purely Biblical reason to use December 25 as the true historical day of Jesus’ birth.

Based on Jewish Holy days, and the fact that shepherds were out in the fields with their flocks, many scholars feel that the most likely birth date might be in the Fall of the year. Interpretations based on lambing season, climate. flock locations all have good points to help justify a Fall annunciation. Other scholars choose to place it in the Spring (and for some of the same reasons!), but it’s just not conclusive. As a result, men have disputed and debated the true birth day of Christ ever since… I would submit that anywhere there is division, dispute, and debate, we find opportunities for the great deceiver to bend and twist the truth.

If I were the devil, I would love anything that creates doubt or confusion about Jesus. (Even his birthday.) I would certainly be opportunistic enough to take anything not explicitly stated in Scripture and try to use it for division or doubt. (As a parenthetical note, there is NO real debate as to whether Jesus of Nazareth was an actual historical figure. There are still people who continue to try to change that history today. But then there are also those who still claim the earth is flat, or that the Holocaust never happened…)

Even though the exact date may be obscure, there is NO DOUBT that Jesus of Nazareth had a birthday! We just don’t really know if it was in April or not.

A New Theory That Makes Sense to Me

My lovely wife Nancy has a very interesting idea about April first. She has often noted that it seems like Satan loves to mess with days that are special to Christians. Several significant church holidays have been tied to pagan activities or worldly festivals and traditions, and are therefore subject to criticism, or worse, to perversion.

Easter, for instance, was loosely related to Ishtar festivals, which celebrated fertility and spring. All manner of pagan activities took place around THAT celebration! Halloween has been tainted by ties to Satan and evil (so much so that many Christians refuse to celebrate it and have renamed it “Fall Festival”. But there’s very little “hallowed” about Halloween these days.) So where did Christmas come from? It was never really tied historically to the exact birthday of Jesus, and the very year it occurred is not really clear from Scriptural and historical accounts. (In fact, it probably happened around 4 BC to account for Tiberius and likely census dates).

We celebrate Jesus’ birth on December 25 because it came from a traditional church feast day that started in the 4th century AD (which was also based on a pagan feast day!). Scripture never gives the exact date, but the fact that sheep were out grazing in Luke’s account could indicate early spring. My wife Nancy speculated that since Satan likes to 1) mess with anything godly; 2) cast aspersions about who Jesus was; and 3) make Christians look foolish, then perhaps the most logical date for the birth of Christ would be April 1.

If the great Deceiver wanted to call attention away from Jesus, why not make the day of his birth an annual Fool’s day? Make it day of pranks and foolishness rather than a day of reverence and celebration? It’s not based on scholarly research, but to me it makes sense because it is just the kind of thing that the great deceiver would do: he would try to make Christ look foolish and to create a case for doubt around His birthday.

However, if Satan did that, the joke is on him. As Paul said, “God hath chosen the foolish things of the world to confound the wise; and God hath chosen the weak things of the world to confound the things which are mighty. (I Corinthians 12:7, KJV). If Satan is somehow behind turning the day of Jesus’ birth into a Fool’s day, then his little joke is just like the Cross: he thinks he won a battle when he actually lost the war!

So, What does April Fool’s Day Have to Do With Jesus?

Scholars just cannot agree, from all the evidence they can see,
The very day of Jesus’ birth. They know for sure he came to earth,
And has a place in history, but there is ambiguity
Because the Bible does not say which year, or month, or week, or day.
I know the Devil roams about to cast destruction, death, and doubt–
Using falsehood to disguise, and shrouding truth with outright lies!
I’m sure he’d love to use his tools to turn us into April Fools,
Prompting men to cast some scorn about the day that Christ was born.

But please o seeker, just remember, whether in April or December,
Jesus Christ was really here. On that, we can be crystal clear.
We may not have the day exact, but Jesus came, and that’s a fact.
So if you’d like to have debate, I wouldn’t wait, or hesitate–
Let’s talk about eternal fate, and whether Jesus shot us straight,
And if the things he said were true. I’d research that, if I were you!